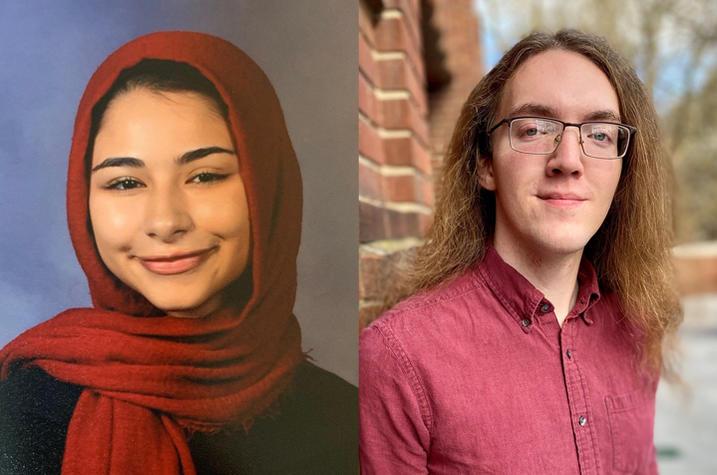 The Arnold and Mabel Beckman Foundation’s Beckman Scholars Program is a 15-month mentored research experience for exceptional undergraduate students in chemistry, biological sciences and interdisciplinary combinations. UK was selected as one of 14 institutions of higher learning nationally to receive the award this year. A highly multidisciplinary program, SUCCESS is built on the cornerstone of chemistry as the central science that unites UK’s Research Priority Areas.

Ghoneim will be investigating novel anti-inflammatory drug candidates in the lab of Linda Van Eldik, director of UK’s Sanders-Brown Center on Aging and professor in the College of Arts & Sciences Department of Neuroscience. Last year, Ghoneim participated in the Markey STRONG Scholars Program in the lab of Yvonne Fondufe-Mittendorf, where she investigated the effects of inorganic arsenic exposure on human lung cancer cells. She said that after her positive experience studying cancer, she was motivated to explore her other passion of studying the brain.

Ghoneim, who is also minoring in pharmacology, plans to attend medical school in fall 2024. She says the Beckman Scholars Program’s commitment to diversity resonates with her aspirations to contribute as a minority, scientist and activist.

“I believe diversity and inclusion in the classroom and laboratory are critical for academic and research success,” Ghoneim said. “As a Beckman Scholar, I will use my experiences and diverse perspectives as resources for problem-solving which will enhance both the program and research at large.”

Sornberger is joining the lab of Chad Risko of the Department of Chemistry and the Center for Applied Energy Research. He will be investigating new π-conjugated molecules, which are building blocks of materials used in technologies for clean energy production and energy conservation.

“The impetus for this project comes from the ever-growing necessity to develop energy alternatives as well as to reduce energy usage,” Sornberger said. “Ultimately, the SUCCESS program would allow me to provide a means for the future development of clean technologies while I further develop my skills as an independent researcher.”

After completing his chemistry and mathematics degrees as well as a minor in computer science, Sornberger will attend graduate school, where he will continue to pursue research of materials through computational chemistry and machine-based methods.

Sornberger is an advocate for the representation of fellow LGBTQ+ people in STEM and plans to create a student organization for queer undergraduates in the physical sciences.

“As I do now, I would continue to share my own perspective and experience as a queer researcher to encourage others to pursue their own scholarly work,” Sornberger said. “Fundamentally, science should be as accessible as possible to everyone who wishes to participate, and any person capable of improving this accessibility should work towards this goal.”

As Beckman Scholars, Ghoneim and Sornberger will receive $21,000 over 15 months: $18,200 for a student stipend and $2,800 to support scientific supply and travel for current research activities. Faculty mentors will also receive $5,000 to support educational expenses.

Each Beckman Scholar must perform research activities part-time during one academic year and full-time over two consecutive summers. They must also complete a required training and professional development series, at least one outreach or service activity during the academic year and mid-program and end-of-program surveys. Scholars will participate in the SUCCESS Roundtable series, present at the UK Showcase of Undergraduate Scholars in April 2023 and attend one Beckman Scholar Symposium.

The University of Kentucky is increasingly the first choice for students, faculty and staff to pursue their passions and their professional goals. In the last two years, Forbes has named UK among the best employers for diversity, and INSIGHT into Diversity recognized us as a Diversity Champion four years running. UK is ranked among the top 30 campuses in the nation for LGBTQ* inclusion and safety. UK has been judged a “Great College to Work for" three years in a row, and UK is among only 22 universities in the country on Forbes' list of "America's Best Employers."  We are ranked among the top 10 percent of public institutions for research expenditures — a tangible symbol of our breadth and depth as a university focused on discovery that changes lives and communities. And our patients know and appreciate the fact that UK HealthCare has been named the state’s top hospital for five straight years. Accolades and honors are great. But they are more important for what they represent: the idea that creating a community of belonging and commitment to excellence is how we honor our mission to be not simply the University of Kentucky, but the University for Kentucky.