Year of the Middle East

For several decades, studying Islam in Central Asia meant beginning with questions, analytical categories, and conceptual frameworks rooted in Soviet and Russian studies; this approach, combined with a lack of basic understanding of the historical experience of Central Asian Muslims prior to the Soviet era, led to host of misconceptions surrounding the character of Muslim religious life in the Soviet era, the impact of Soviet policies and realities, and trends in the renegotiation of religious identities in the post-Soviet age.  Recent years have brought, in some circles, growing awareness of the need for approaches drawn from Islamic studies and from a  historically-grounded understanding of the history of Muslim religiosity in Central Asia.  This lecture will discuss some of the misconceptions rooted in the ‘Sovietological’ approach to Islam in the region, and the lessons to be drawn from viewing the region through the lens of Islamic studies, with a particular focus on the ways in which religiosity was manifested in Soviet times, and on the ways in which religiosity shaped or interacted with notions of ‘national’ identity.

Date:
Friday, March 27, 2015 - 03:00 pm
Location:
Room 249 of the Student Center
Tags/Keywords:
passport
year of the middle east
Type of Event (for grouping events):
Passport to the World
Year of the Middle East

Public Lecture: "Hittites, Greeks, and Others: Interaction between Ancient Anatolia, Greece, and the Levant"

One of a group of Indo-European speaking peoples intrusive to Anatolia, the Hittites rose from a modest city state to establish first a kingdom on the central plateau and then an empire that fought with the kings of Babylon and Assyria, the Hurrians, and the pharaohs of Egypt for control of SE Anatolia, Syria and Palestine, and contended with one or more Mycenaean Greek kings over western Asia Minor. One of their many vassal states was Wilusa, certainly to be identified with Troy. The multiethnic Hittite kingdom absorbed heavy cultural influence from many peoples and played a role in transmitting Ancient Near Eastern culture to the Greeks. A combination of factors, including the assaults of the “Sea Peoples”, brought an end to the Hittite Empire shortly after 1200 BCE, but some former subordinate states inherited their name and culture and maintained a degree of independence for several centuries until conquered by the Assyrians. It is these “Neo-Hittite” states that are represented in the “Hittites” of the Old Testament.

Amanda E. Rogers holds a PhD from Emory (2013). She is an academic, journalist, artist, and political analyst whose work appears in numerous forums, including the BBC, Al-Jazeera, and the New York Times. Her forthcoming monograph, Semiotics of Rebellion From Morocco to Egypt: Advertising Revolution and Marketing Allegiance, focuses on the critical use of politicized cultural discourse for international alliances, regional stability, and intra nation-state image warfare.

With funding from Chellgren Center.

Israel is a microcosm of the sign language world.  Within a country about equal in area to New Jersey, Israel contains both a widely dispersed deaf community sign language used in schools, Israeli Sign Language, and a number of much smaller village sign languages, each confined to a single community and used only within its confines.  Our research team was formed to study Israeli Sign Language, but we have also spent the last decade studying and documenting the sign language of the Bedouin village of Al-Sayyid, located near Be’er Sheva, the ancestral home of Abraham.  I will compare the history and structure of these two languages and show how the study of their emergence has provided a variety of insights into language and human nature. 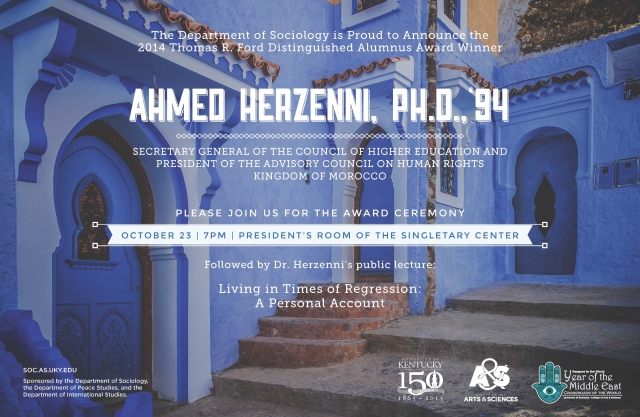 "The Israelite Samaritan Today: Past, Present and Looking to the Future."

Today’s Israelite Samaritans are ‘living history’, as we respect and observe our way of life and heritage. Through our sometimes difficult past, we have learned to coexist harmoniously with our neighbours, and we are a bridge for peace (gesher leshalom) between all peoples . We are the root of the Abrahamic religions in the region, including Samaritanism, Judaism, Christianity, Islam, and the Druze and Bahai faiths. Though rooted deeply in the past, we are a vibrant modern community with contemporary enterprises and interests. In March 1919 there were only 141 individuals, in Nablus and Jaffa. By September 2014, the Israelite Samaritan Community numbered 770 souls, divided into four households, all in the Holy Land. This talk will explore the past, present, and future of the Israelite Samaritan people.

“The Street is Ours”: Beirut Graffiti and the Art of Beautification, Commemoration & Social Critique." 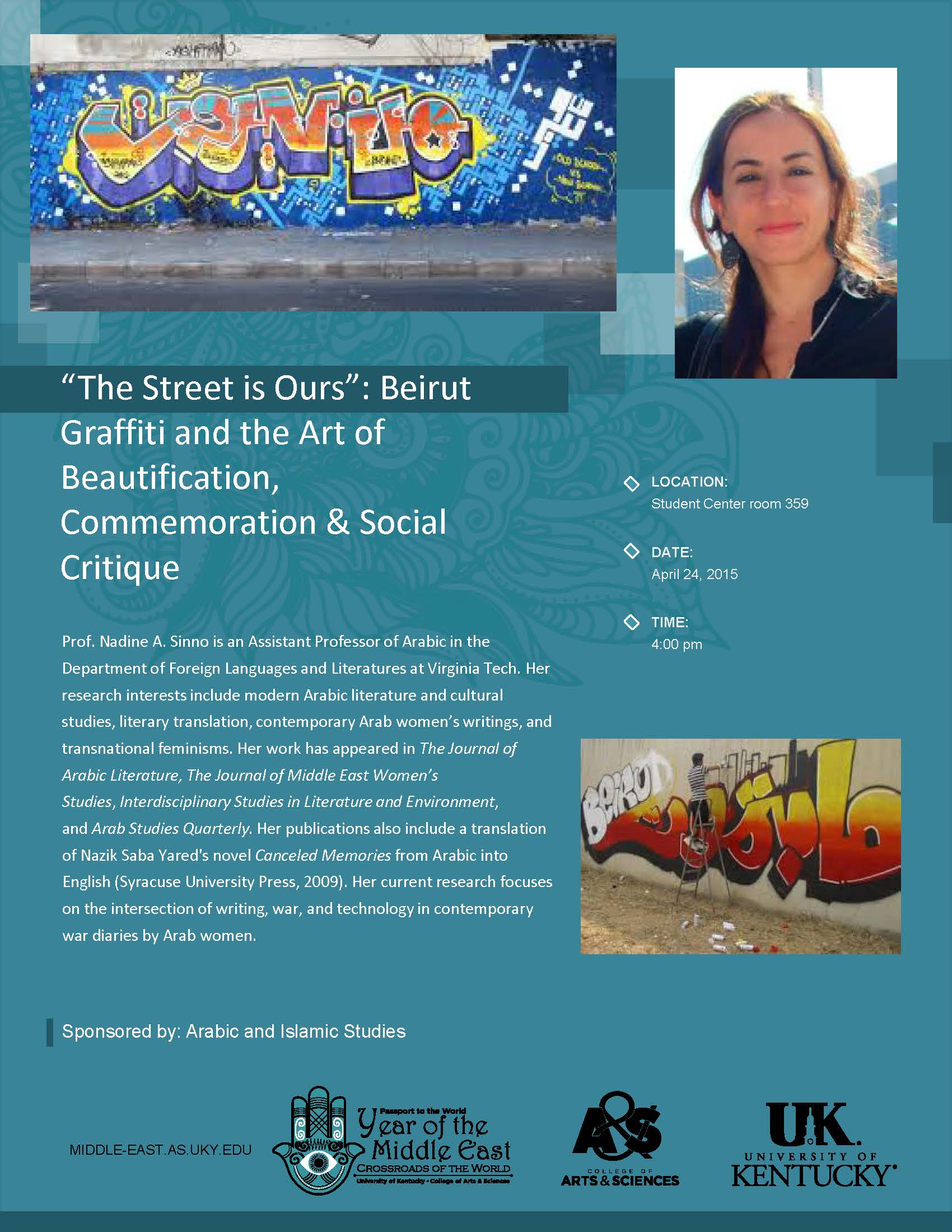 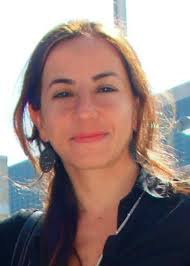 Professor Joel Gordon will explore the depiction of ‘normative’ religious practices and personal expressions of religious identity in recent Egyptian movies with a particular focus is on Egyptian youth.  Whereas in the past signs of piety had been restricted to either ‘traditional’ Egyptians – often in comic fashion – or political extremists, a few recent films have dared to depict ‘normal’ veiled women and bearded men and even a social environment in which questions of piety, morality and proper behavior dominate the discussions, concerns and conflicts between young Egyptians.  These films may point to a growing willingness by film artists to honestly explore social trends that have been taboo, especially as Egypt enters a new political era.