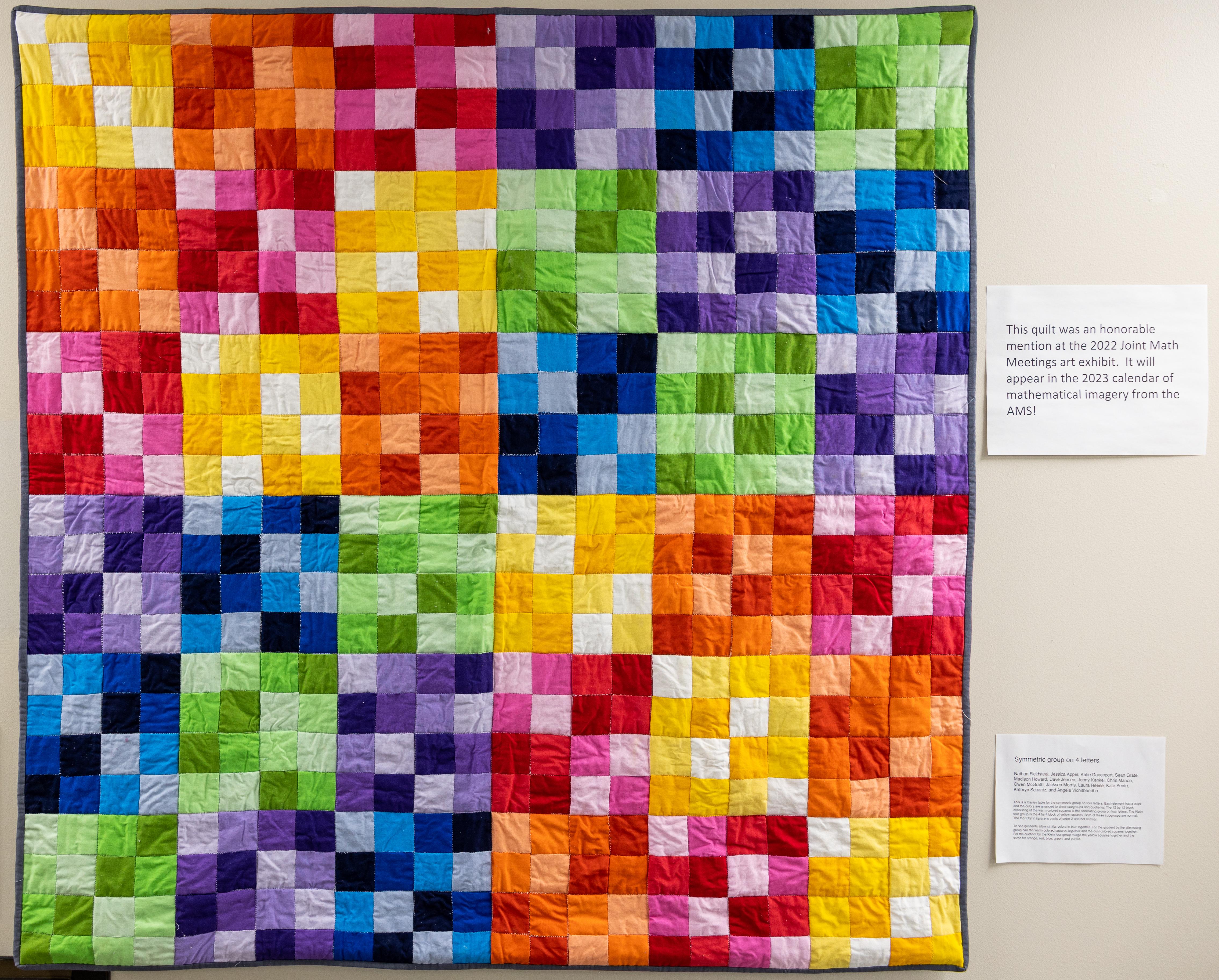 LEXINGTON, Ky. -- As it turns out, mathematics can be a soft science: soft as a cozy quilt.  A group of University of Kentucky College of Arts & Sciences students and their professors demonstrated that concept when they patched together an award-winning quilt with a color scheme based on group theory.

“Our group is part of the UK Math Lab,” said Kate Ponto, associate professor of mathematics in UK’s College of Arts and Sciences. "The Math Lab coordinates undergrad research in math, but in addition to that we want to create low-stakes entry points for other students. We want opportunities for students who aren’t able to commit for a whole semester or commit for many hours a week — just something flexible. And so, we started making quilts.”

The lab’s most recent quilt, “Symmetric Group on Four Letters,” hangs in the hallway of the seventh floor of Patterson Office Tower. It received honorable mention in the Joint Mathematics Meetings art event in April and will be featured in a mathematics-themed calendar for 2023. Ponto’s group, which has been in abeyance since the start of the COVID pandemic, created three previous quilts, all of which were exhibited at the meetings’ art exhibits.

Ponto is a quilter of note herself when she’s not teaching topology and other areas of mathematics. Her quilting group, which collected colored patches for the ultimate product, met at 3:30 p.m. Fridays. Like less mathematically inclined quilting bees of old, this group liked hanging out as much as sewing.

“"Our first summer we had two students, and the following semester we had four students.” she said. “After a year or two more and more people were coming. The most convenient time was 3:30 p.m. Fridays. Some days they're just talking about whatever was on their minds— I learned a lot about a sorority on campus, the marching band and geography. But the students also got to ask questions like, 'Is this a good class to take?’ or 'Is grad school a good idea?’ It became a mechanism to give students a chance to talk to each with other and build community and talk to the faculty.”

Most of the students who worked on the current quilt have graduated. They hand-sewed the different squares of fabric in a process involving freezer paper for tracing and backing.

“They were hand sewn together with varying levels of skill," she said.  “"there was a role for everyone - even the people who didn't want to sew.”

“Our quilt is the table for the symmetric group on four letters. Since we are using a very different operation our quilt is more complicated.

"We usually give addition and multiplication tables where the entries are numbers," she said. “This can be really useful if we want to compute, but it can make it really hard to see other interesting things. In our quilt, you can see that the ,warm colors and cool colors are grouped together. This is a really important concept and really hard to see in the more familiar representations."

Ponto hopes to restart the quilting sessions this summer. She finds that these three-dimensional explorations of mathematical phenomena represent teaching opportunities.

“Math is usually black-and-white words on the page,” she said. “It's really fun to interject some color into it — not just metaphorical color but literally different colors.”